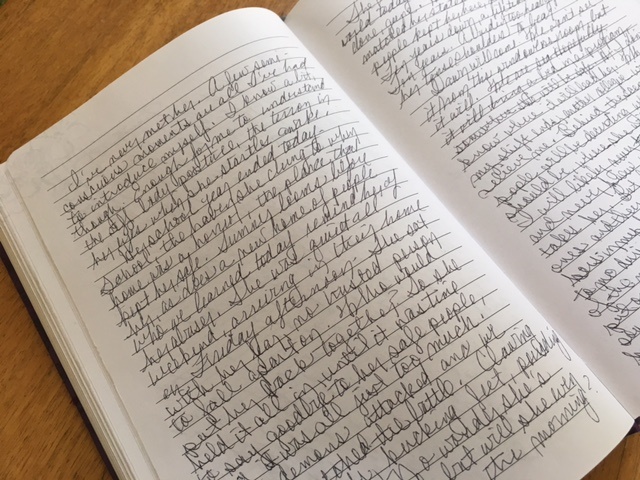 The hallway light shines through the rectangle window, illuminating the little room.  The fifteen inch tube television is on, but it is just black and white “snow,” as we used to call it, no tape in the VHS player.  My ears are appreciating the break from the noise of the classic Disney movies that were playing.  The hours have slogged by, the early hours of the morning now upon us.  I arrived at 11PM, relieving my co-worker who’d been here since the little girl’s arrival.

“How is she?” I’d asked in a hushed whisper at the door.

As I write this, the child in question twitches in her restless sleep, covers twisted into a chaotic knot under her prone form.  Nothing about this child is restful.  Every so often, probably synched up with some part of her REM cycle, she groans and shifts.

“I’m okay, I’m okay,” her frantic voice whispers, sounding anything but okay.  It makes me jump every time, but I pray the mantra soothes some part of her soul.

I’ve never met her.  Sitting at a sleeping child’s hospital bedside cannot be considered meeting them.  She’s opened her still-sleeping eyes a few times and I’ve softly introduced myself, but I doubt that my presence registered.  She arrived in one of our homes late on Friday.  The weekend went fine, I’m told.  A trip to the park, a trip to the store for a new comforter, ice cream; smooth sailing.

Today was her last day of school.  School, the haven she’d clung to when everything else went sideways, when home was a horror, when the people who were supposed to keep her safe didn’t or couldn’t.  I don’t know which.  School became the safe place, but summer loomed large, a new home of people who we learned today reminds her too closely of her abuser.  The quiet of the weekend wasn’t quiet at all, we realize.  It was carefully locked up terror and no place to let it out until she was with her safe people in her safe place.  She couldn’t fall apart in her new home, couldn’t explain to them that her mind was flipping from past to present to unknown future with the speed of a spinning coin, couldn’t fall apart in their presence because who knew if they would be able to put her back together?  So she waited, she held it in until she was with her teachers, her counselor, when the dam burst.  With gnashing teeth and clawing fingers the demons ripped out of her, telling the world what her words could not manage to form.  Terror is ugly, terror is angry, terror is a beast.

We were called to the battle, not to fight, but to witness and patch up the little victim.  Eleven years of fighting were too much for her and she decided she didn’t want to fight any more.  Didn’t want to be a part of the world anymore, wanted to be done, asleep forever.  But her safe people were there, the people she could count on, and they kept her safe again, exactly what she needed them to do.  So here we sit.

Dawn will come.  We won’t see it from this windowless room, but it will arrive.  I know she will wake at some point, will stir, and will ask me questions.  Where will she go, what will she do, who will take care of her.  I don’t have an answer.  When my shift ends, another colleague will take my seat, will play games with her, will watch more movies about good triumphing over evil, will encourage her to eat her lunch.  Behind the scenes, phone calls will be racing back and forth across the lines, people who don’t know her will be planning her tomorrows, doing their best with what they have and what they know, trying to keep her safe from the past that creeps into her present.

When I leave, I will probably never see her again.  We don’t have a home available for her that will meet her needs.  She will go somewhere, of course, but I won’t know where the world will take her.  Like so many other little ones and their stories, pieces of it will stay in my memory and heart.  A Disney song will play and I will be snapped back to this quiet vigil, the light from the hall shining across her tense little form.

I put on another tape to muffle the sounds of another patient screaming down the hall, hoping to let her rest.  She stirs, the blankets slip to the floor.  Quietly, I explain that I am going to put her blankets back on, going to cozy her up, tell her she is safe.  I untangle them and draw them close around her shoulders.  In the darkness, it is the only comfort I can offer.  I return to my chair, continue the vigil.