It’s easy to find Caroline Dunlap and the Harm Reduction team at JRI’s Program RISE. They’re the ones wearing backpacks while meeting people in downtown Framingham, dispensing care and concern, along with vital supplies, to the region’s active drug users.

"We are trying to fill in the gap” for services to people who are part of a “stigmatized population” who inject, smoke or snort opioids or other drugs and run the risk of dying from drug overdose, becoming homeless, or contracting HIV or Hepatitis C or infection from sharing used needles, Dunlap says.

The team’s services range from giving out socks and winter clothing, teaching drug users how to use Narcan, also known as naloxone, to reverse the effects of an overdose, helping people sign up for the SNAP program (Food Stamps) or deciding to enter a detox or treatment program.

“Our main goal is to provide compassionate care” — without pressure — to people who often live on the margins because they use drugs, Dunlap says.

Harm reduction originated in the 1980s in response to the AIDS epidemic. Many of AIDS’ early victims lived on the streets, injected drugs, were gay or transgender or were sex workers largely ignored or even scorned by others. Because government offices and policy usually did not provide for their needs (needle exchange programs were illegal) people found ways to care for one another.

“We are all that we have and it’s up to us to protect each other,” she says.

Dunlap went to college to study environmental science in order to become a park ranger, but she moved from Massachusetts to the San Francisco Bay Area and was drawn to harm reduction work, in part because of her own struggles with depression.

Dunlap’s team of three or four meet 15 to 30 clients a week at their offices, but they also walk around downtown Framingham with backpacks and wearing shirts and jackets that read “Harm Reduction Staff” with the program’s phone numbers and talking to people on the street. They give out essentials to help the people they meet: hygiene supplies, kits for safer drug use, wound care kits.

Program RISE is also introducing a mobile van that will allow drug users to exchange syringes, get Narcan training or get tested for HIV and sexually transmitted infections.

The trauma associated with the COVID-19 pandemic, related unemployment and family strains are a factor in the rising overdose rates, she believes. Yet people have a hard time talking about it.

“Drugs provide an out for people in traumatic circumstance,’ Dunlap says. “There’s so much stigma around drugs that people often are hesitant to ask for help…Anyone can suffer from addiction” but often people don’t recognize the cost of habitual drug use until it affects a child, husband, coworker, parent or friend.

“It’s hard to be empathetic until it’s your kid (but) you never know who around you is in trouble,” she says. “We are here to look out for each other. I’m definitely alive because someone looked out for me.” 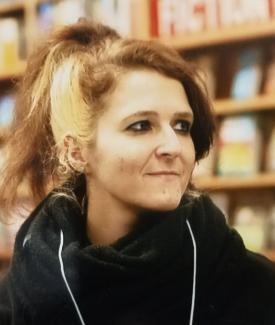