JRI is one of the largest social justice/human services agencies in New England, serving between 20,000 and 25,000 people each year in Massachusetts, Rhode Island and Connecticut.

Nearly 70 percent of those served by JRI (Justice Resource Institute) are children and families in need of shelter, full-time residential services, mental health care, help for HIV/AIDS, support for transgendered youth, and a myriad of other challenges.

Here is some of what JRI’s chief executive officer, Andy Pond, and chief operating officer, Mia DeMarco, said about trying to make a difference in the lives of some of our most vulnerable and traumatized citizens.

The Medicare and Medicaid Act of 1965 encouraged states to begin “deinstitutionalizing” mentally ill and developmentally delayed citizens from big state hospitals where tens of thousands of patients were kept locked away and, in many cases, neglected and mistreated.

“‘Warehouse’ would be a kind word [for the conditions inside those state hospitals]. Treatment wasn’t part of the process,” said Pond.

Enter JRI and many other non-profit agencies to pick up the slack. They ensured that there were treatment options for people being released to receive care in less restrictive, community-based settings.

CEO Pond describes the expanding JRI mission as attempting to reduce the “quotient of human misery….everyone has a right to the pursuit of happiness.”

That means helping foster families care for traumatized children who have often known abuse and neglect, moms and kids who have been forced from their homes, youths referred by the juvenile justice system and many others.

“If you can think of a social issue or need, we probably provide a service for that family or individual,” says DeMarco.

She was drawn to the field when she was assaulted by a teen-aged girl while working as a direct care counselor when she was in nursing school.

“I realized the pain so many people carry around that we just can’t see,” she said.

Pond added, “The history and mission have pretty much stayed the same since the beginning. What’s expanded is the scope….We don’t have a good elevator pitch because you can’t stay on an elevator that long.”

JRI has pioneered the use of trauma-informed care in teaching yoga to children who have been abused, working with young equestrians in forming a bond with and caring for horses, and helping children in residential schools reshape their lives and mend their broken families. The agency has researched various treatments, tracked the results of that treatment and then improved those procedures to ensure that they work.

Pond said, “One of the things people care about is [these treatments] cost money…and what happens to that kid after he leaves” a JRI program.

People who work for human service agencies like JRI are people who care about others and about making a difference in the lives of their neighbors.

DeMarco said, “People who do this work are just incredibly caring and compassionate.”

For the past decade, JRI has been named one of the best employers in Massachusetts (and recently in Connecticut) because of the financial support it provides for employees’ education and opportunities for professional advancement. But it’s more than just financial support and a career boost. It is the opportunity to make a difference in the lives of other people, the chance for personal growth alongside others who share a passion for the JRI mission. 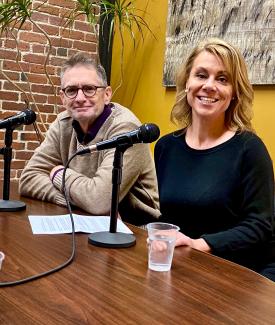