Episode 3 - **This podcast was recorded prior to the COVID-19 pandemic.

And while that sexualized content might be normal behavior among teens curious about their emerging sexuality, increasing numbers of social media applications and online gaming features can expose children to sexual predators who used the internet to identify potential victims, form online relationships within them and sometimes extort sexual favors from them.

That was the message from JRI professionals who work with children who have been victims of online sexual exploitation or who are at risk of becoming victims. Meredith Rapoza, Division Director of Permanency and Latency Services at JRI; Katryn Haley-Little, Clinical Director at My Life My Choice, a program of JRI helping children who have been exploited or who are deemed to be at risk; and Michelle Loranger, Executive Director of the Children's Advocacy Center of Bristol County, were guests on JRI’s weekly podcast series, “Justice in Action: Making a Difference as Leaders in Social Justice.”

And while the victims of sexual exploitation are “disproportionately female…(the problem) crosses all genders and identities,” says Loranger.

The explosion of online applications make it imperative that parents and legal guardians monitor their children’s use of the internet, engage them in honest discussions about both the positive impact of the internet and social media that allow people to find information almost immediately and connect with others online and the potential harm that affects thousands of children and teens each year.

“More than half of those (children) exploited sexually met their assailant online,” says Haley-Little.

That means parents must stay alert and model appropriate use of online tools and games.

“If you’re going to allow your child to have access to some kind of electronic device, you’ve got to start thinking about ‘Is this device safe,’” says Rapoza.

Advice to parents and guardians?

Keep the communications line open, look for changes in children’s behavior and encourage children to speak up if they are asked to share contact information, photographs or videos with strangers. 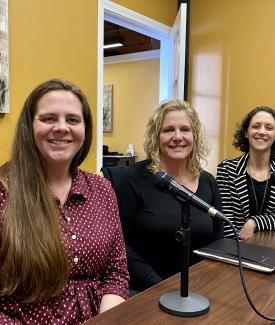