Sexual assault, bullying and harassment are traumatic for all survivors of any age. Transgender and non-binary youth are at high risk for encountering these experiences, which can lead to the development of complex trauma that may include a lack of trust in other people and even estrangement from their own bodies.

About half of all transgender or non-binary youth have experienced sexual assault. As a result, many experience anxiety and depression, including suicidal thoughts, and are more likely than their cisgender peers to live with a sense of powerlessness and alienation from their own bodies.

Justice Resource Institute works with transgender and non-binary youth who live with “embodied trauma” that causes a range of physical symptoms that traditional forms of “talk therapy” or drug therapy have been mostly ineffective. One of JRI’s approaches is “trauma sensitive yoga” that Jenn Turner, co-director of JRI’s Center for Trauma and Embodiment, says has proven to be an effective approach for trauma survivors because it addresses the physical manifestations of trauma that many survivors live with.

She said it has been used effectively as an intervention for female-identifying veterans who were sexually assaulted in the U.S. military.

Shaina Doberman is the director of the Younity Drop-In Center in Gloucester, which seeks to empower young adults ages 16-25 by providing a space where they can identify goals, overcome barriers, and explore what inspires them. The center operates under a Peer Support model, and specializes in assisting youth and young adults who identify as LGBTQ+.

Embodied trauma occurs because overwhelming experiences are stored in our bodies and trauma-sensitive yoga is an effective way to reconnect survivors of complex trauma with their own bodies.  Participants are never told what to do with their bodies and are invited to participate in the embodied mindfulness as much or as little as they want and need.

JRI’s Center for Trauma and Embodiment recently received a grant from the Tower Foundation to train future instructors in trauma-sensitive yoga. The training lasts for seven months and is in addition to traditional training for yoga instructors.

You can learn more about the work of the Trauma Center Trauma Sensitive Yoga program at the center’s website. If you are interested in supporting their work, you can donate here. 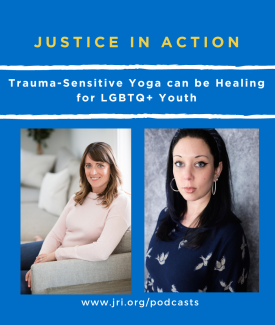