Jennifer Turner was a voice student at the New England Conservatory of Music when her instructor approached her during a rehearsal.

“You,” her instructor observed, “aren’t in your body.”

It took her a while before she understood what her instructor meant, but when she did, it would change her life.

She took yoga classes, and the body control that yoga encouraged her to heal from her own trauma she still was carrying. It was, she said, “like coming home.”

The awakening guided her to a new calling: using yoga to help people who had suffered psychological trauma from physical and emotional abuse or neglect, and helping them reconnect with their bodies.

Today, Turner is the co-director of Justice Resource Institute’s Center for Trauma and Embodiment, where she and co-director and founder Dave Emerson use Trauma Center Trauma-Sensitive Yoga (TCTSY) to help victims of physical or sexual abuse, neglect or other trauma use their bodies to heal their minds and spirits.

She recently edited and co-wrote a book about her work. It’s called “Embodied Healing: Survivor and Facilitator Voices from the Practice of Trauma-Sensitive Yoga.” The book, available online through Amazon and Barnes & Noble, describes her work and research and recounts “what it’s like to heal.” Included are the observations and research findings of yoga facilitators trained in trauma-sensitive yoga that has helped sufferers of complex trauma heal their hearts, minds and bodies.

Complex trauma can produce a host of symptoms, from racing heartbeat to changes in breathing, hyper-vigilance about any change in their physical environment, depression and anxiety, loss of control of their own bodies or even the loss of feeling in their bodies.

TCTSY helps clients reconnect and exert control over their bodies — something that Turner describes as “reinhabiting” their bodies after deep psychological trauma, usually at the hands of a trusted parent or guardian, coach, teacher or religious figure who abused the power of their position to manipulate their victims.

The techniques of TCTSY, which involve a yoga facilitator who suggests rather than instructs and who never touches a student, are being taught at hundreds of places around the globe, sometimes as a supplement to traditional forms of “talk therapy” and sometimes in the absence of talk therapy.

The principles of TCTSY are used in more and more traditional yoga classes because facilitators recognize that many of their students come to yoga to help them heal from trauma in their own lives.

“The goal isn’t yoga,” Turner said. “The goal is reclaiming your body through yoga.”

You can listen to Jennifer Turner discuss her work here. And you can purchase her book at amazon.com or barnesandnoble.com.

If you’d like to try a TCTSY class, please visit www.traumasensitiveyoga.com or www.jri.org/tctsy-classes. 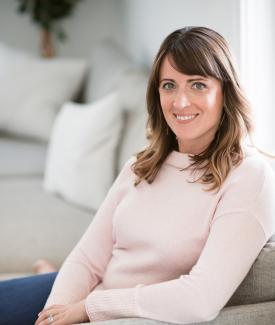